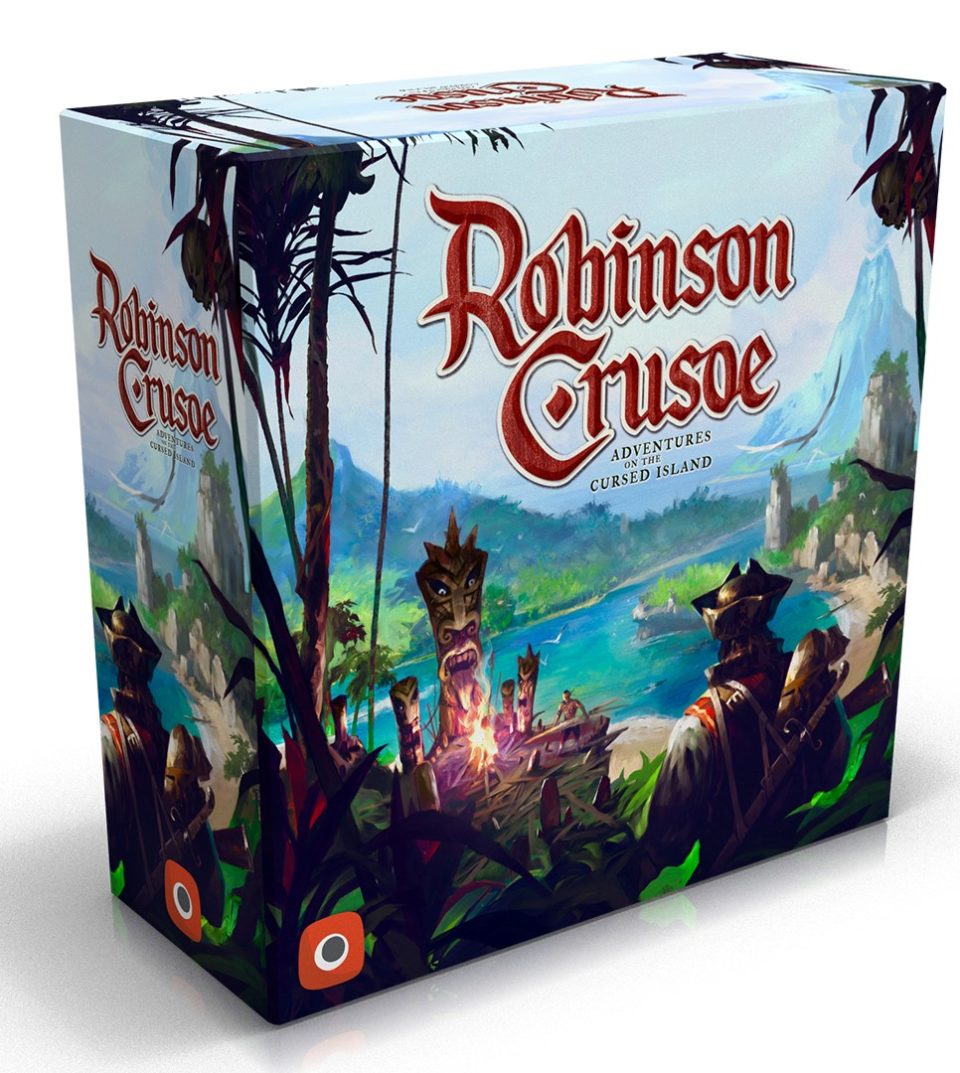 Portal Games and Awaken Realms are proud to announce their cooperation on Robinson Crusoe: Collector’s Edition, a new and enhanced deluxe version of the bestselling game Robinson Crusoe: Adventures on the Cursed Island. The new edition, as well as the new expansion, The Book of Adventures, are coming to Gamefound on March 23rd.

Robinson Crusoe: Collector’s Edition brings a completely new and improved experience to the classic game. The bigger box will include the base game with new exciting features:

In addition to the Collector’s Edition, the Gamefound campaign will include the highly anticipated expansion, The Book of Adventures. This expansion adds 20 new scenarios, plus variants for existing ones, and is organized by theme, gameplay length, and difficulty level to help players choose the perfect scenario for every game night! With this new feature, The Book of Adventures will transform Robinson Crusoe into a board game for everyone, regardless of their age or board game experience. Players can now easily find the right scenario to play with their children, friends, or gamers in their playgroup.

The Gamefound campaign will also include a special Upgrade Pack for fans who own the older versions of Robinson Crusoe and would like to get some of the most important new components.

About the Portal Games and Awaken Realms cooperation:

This is the second time Portal Games and Awaken Realms have joined forces in creating an unforgettable experience. Their first project, the critically acclaimed Cry Havoc—for which Awaken Realms created miniatures—won multiple awards and brought lots of great experiences to gamers around the world.

With this new project, Robinson Crusoe: Collector’s Edition, Portal Games and Awaken Realms are aiming at taking the thematic experience up a notch. Awaken Realms uses all their experience gained throughout the years to create amazing miniatures, which will bring the game’s components to a new level.

“We are extremely excited to be involved in this project! Robinson is a masterpiece of adventure board games and a lot of people on our crew are fans of dying miserably on the Cursed Island. We will put all our enthusiasm into creating some unforgettable sculpts that will bring your adventures to live!” – Marcin Świerkot, Awaken Realms CEO

“Our ultimate goal was to make Robinson Crusoe a great experience for every game night and I’m happy to see what we’ve achieved. The four-scenario tutorial campaign will ease new players into the gameplay, The Book of Adventures will allow players to find the right scenario regardless of their time limits, age range, or experience level, and the accompanying app will provide an enormous replayablity to the game. The fantastic miniatures crafted by Awaken Realms will bring unmatched immersion and beauty to the game. I’m absolutely thrilled!” – Ignacy Trzewiczek, Portal Games CEO

Make sure to check out the CAMPAIGN DRAFT PAGE and follow the project! We have prepared a special USD 5 discount for everyone who follows the project before the campaign launch!

Robinson Crusoe: Adventures on the Cursed Island is one of the best adventure board games on the market. It was designed by Ignacy Trzewiczek and first published by Portal Games in 2012. It was later translated into 12 languages, and has occupied the BoardGameGeek’s Top 100 ever since. In this cooperative adventure board game 1 to 4 players take on the roles of shipwreck survivors living on a desert island and facing the challenges of building a shelter, finding food, keeping morale high, fighting wild beasts, and protecting themselves from weather elements. Robinson Crusoe is extremely popular among solo gamers and highly regarded for its immersive multiplayer experience.